Towards the end of last year, I had the pleasure to compete in the Pacman CTF competition that was run as part of the COMP90054 course at the University of Melbourne (Semester 2 2020).

The CTF competition involves a multi-player capture-the-flag variant of Pacman in which the students make use of classical planning as well as reinforcement learning techniques to design agents that play Pacman against each other in a tournament.

The objective of the Pacman agents is to eat as much food as possible on the far side of the map, while defending the food on their home side (the contest was originally designed by Berkley and is described in further detail here).

In accordance with the COMP90054 Code of Honour, my team and I are not allowed to release the code that we used for our Pacman agents, but nonethless I would like to use this blog post to discuss which approaches we considered and which we found to perform best in the competition.

If you are interested in further details, please refer to the Wiki that is part of the following repository: COMP90054-Pacman-Competition

At the beginning of the competition, we experimented with a variety of techniques such as classical planning with PDDL or value iteration using a model-based MDP. In the interest of time (the competition took approx. 6 weeks), we decided to settle on two main approaches with which we competed in the tournament and achieved satisfying results (top 10% position in the leaderboard).

In the remainder of this blog post, I would like to talk about the various advantages and disadvantages of both techniques.

The motivation for this approach was to produce approximate Q-learning agent(s) (both offensive and defensive) which learns feature-weights of states (described below) that enable the agent to act within the Pacman contest environment.

Approximate Q-Learning is a means of approximating the Q-functions used in traditional/simple Q-learning. This method utilises reward shaping (providing an agent with useful, intermediate rewards) in addition to function approximation in order to reduce a once-exponentially large state space into a more feasible domain. This is done by:

The following is a list of improvements that eventually became the behaviour protocols to which we attribute the agent’s success:

2. Behaviour Trees with A* Heuristic Search

The motivation for this approach was to produce an agent which uses behaviour trees as well as A* heuristic search to accomplish different goals within the Pacman contest environment.

Behaviour trees are trees containing hierarchical nodes which control the flow of decision making of agents. These trees are defined as directed acyclic graphs with internal nodes corresponding with events/stimuli, and external nodes corresponding with behaviours (in contrast with hierarchical state machines whereby stimuli leads to states, rather than behaviours). The image below illustrates a simplistic behaviour tree for a two-armed robot (By Aliekor at English Wikipedia, CC BY-SA 3.0, https://commons.wikimedia.org/w/index.php?curid=39804218): 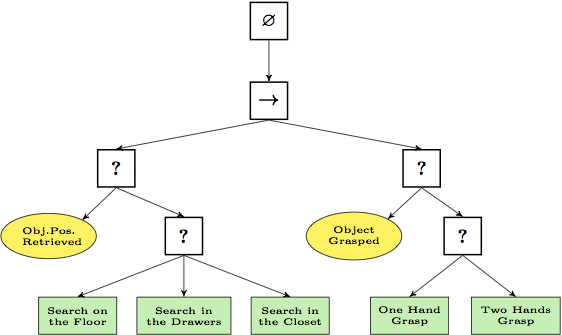 A* (“A star”) is a heuristic search algorithm which generates a lowest-cost path tree from the start node to the goal node. A* utilises a function f(n) which provides an estimate of the total cost of a path from node n. The function f(n) is calculated as f(n) = g(n) + h(n), whereby g(n) is the cost to reach node n, and h(n) is the estimated cost from n to the goal node (requiring a heuristic cost function). A* is complete for safe heuristics and optimal for admissible heuristics.

An agent utilising a behaviour tree would be able smart and informed decisions which have been pre-programmed by the agent-designer. Possibilities for evolving behaviour would stem from manual supervision of matches in an effort to assess which stimuli should trigger certain behaviours.